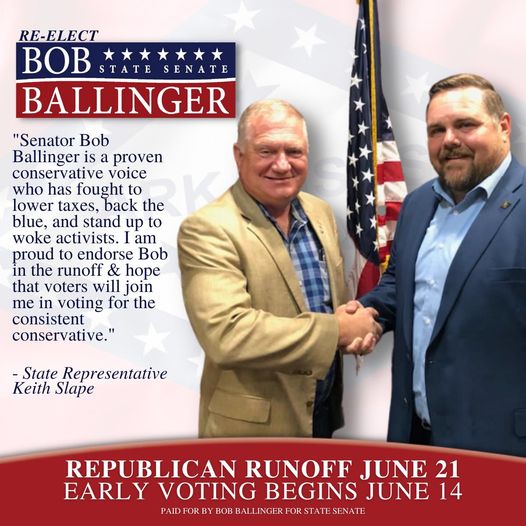 Oark, AR- Today State Senator Bob Ballinger received the full endorsement of Representative Keith Slape (R- Compton), a former Newton County sheriff and candidate for State Senate District 28. Rep. Slape finished in a strong third place in the May 24th primary for State Senate behind Senator Bob Ballinger & his opponent in the runoff. Slape issued the following statement on his endorsement of Senator Ballinger: “Senator Bob Ballinger has been a proven conservative voice who has fought to lower taxes, protect our rights, back the blue, and stand up to woke activists. I am proud to endorse Bob in the runoff and hope that voters will join me in voting for the consistent conservative in the race.” Senator Ballinger said in response to the endorsement: “Representative Keith Slape has been a dedicated public servant his entire career as a law enforcement officer and now as a representative of our conservative values. I am humbled by his support for our campaign and look forward to continuing working with Keith as your State Senator to make our communities better.” Senator Ballinger currently serves Senate District 5 and is in a runoff election for the newly drawn Senate District 28 which includes parts of Boone, Newton, Johnson, and Franklin counties as well as all of Carroll and Madison counties. Senator Ballinger is in his first term in the State Senate after serving three terms in the State House. The Republican runoff election is June 21st and early voting begins June 14th .

You Have to Show-up and Vote - It's Your Job 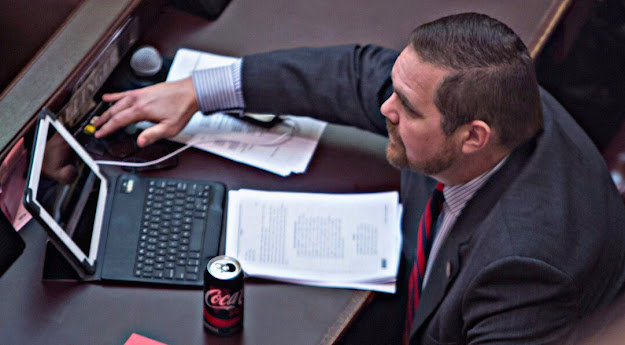 It is never okay to skip work 73% of the time. We would fire, and never rehire, an employee who missed almost 3 out of 4 days of work. When it comes to Bryan King, who skipped 73% of his votes the last time he served, it is important that we do not put him back into office. We are about to face some hard issues in our state. We have runaway inflation, a looming recession, attacks from the woke mob on our way of life (who are also trying to indoctrinate our children), an opportunity to protect life, and attacks on our right to bear arms (and other inalienable rights) certain to be coming our way, we cannot afford to be "represented" by a legislator who skips hard votes. Senator Bob Ballinger has a record that demonstrates that he leads on hard issues, his opponent has a record that demonstrates that he hides from hard issues.

Some of the important bills that King just skipped and would not vote on, one way or the other:

HB2020 Carrying in a Public Building

Enabled more citizens to carry in more locations and reduced the penalty for others who carry in certain prohibited places.

This bill protected the privacy of concealed carry permit holders by exempting from FOIA their identities. At the time, some media outlets were publishing the names and addresses of those who had permits.

Made it easier for the Highway Department to dispose of surplus property.

Protected Arkansans right to believe what they want to believe, and their ability to act on that belief, without government interfering with that right.

HB1980 To Establish the National Motto, "In God We Trust," Display Act.

The first attempt to protect Arkansans right to believe what they want to believe, and their ability to act on that belief, without government interfering with that right.

This bill bans “wrongful birth” lawsuits where parents of a baby born with a disability or genetic disorder sue their doctor claiming they would have aborted their baby if they had known their baby might have a disability.

This bill bans “dismemberment abortion” procedures, with the exception of preventing a serious health risk to the mother. The practice is defined as purposely dismembering a living unborn child in order to extract the fetus.

SB148 Rights of the Unborn.

This bill creates the offense of “infanticide” for physicians who fail to give proper medical treatment to an infant born alive, including infants birthed during an abortion procedure.

This bill appropriates just under half a million dollars for the Arkansas Wheat Promotion Fund that conducts research on growing wheat and promotes the industry.

This bill appropriates over $50 million for a wide variety of subsidy and grant programs administered by the Arkansas Economic Development Commission, including a state version of the federal Community Development Block Grant Program for smaller communities.

This resolution proposes a constitutional amendment to cap attorney contingency fees at 1/3 of the net recovery in a civil action and limits the recovery amount to $500,000 (or three times the amount of compensatory damages, whichever is greater), among other provisions.

This bill allows concealed carry permit holders to receive an enhanced permit to carry firearms on public college and university campuses and other locations, such as restaurants where alcohol is served.

This bill imposes greater price controls on loans by prohibiting fees that overcome the 17% annual interest rate limit for all loans.

This bill extends to 2021 the requirement that state and public-school employee health benefit plans include coverage for treatment of “morbid obesity,” such as gastric bypass surgery.

This bill provides that, should a home school student enroll in a public school, that student cannot be denied course credits earned, placement in the proper grade level, scholarships, or participation in extra-curricular activities solely on the basis of having been home-schooled.

HB1474 Allows Home Schoolers to Participate in Interscholastic Activities at Any Public School.

This bill amends the 'Tim Tebow' law by allowing home schoolers to participate in interscholastic activities outside their resident school district as long as both school districts agree.

HB1574 Reduces Home School Reporting on the Notice of Intent to Home School.

HB1566 Prevents Human Remains from an Abortion from Being Treated as Medical Waste.

This bill prohibits experimentation on organs and tissue harvested from unborn babies and requires aborted babies to be respectfully cremated or buried.

This bill allows home schoolers to participate in interscholastic activities at any private school within 25 miles of the student.

This bill requires employers with five or more employees to provide a monthly pay stub for every full-time employee that lists total hours worked, gross and net wages, along with overtime pay and itemized deductions.

This bill exempts direct primary care agreements between a doctor and a patient from insurance regulations. These agreements, also known as medical retainer agreements, allow access to routine medical services for a monthly fee.

This bill expanded education opportunities for children with disabilities and in the foster care system.

Requires out-of-state companies with no physical presence in Arkansas to collect sales and use tax if they sell $100,000 worth of products or make at least 200 transactions within the state.

Authorizes teachers of grades 7 through 12 to voluntarily instruct more than the current maximum number of 150 students per day by teaching during their conference period. Authorizes a pay raise upon a signed agreement between the teacher and the school district, in an amount proportionate to the teacher’s base pay and the number of additional students taught.

Requires the board to implement a policy that uses funds the state saved on nontaxable insurance contributions to provide premium assistance.

Established the Private Option version of Medicaid Expansion under Obama-Care.

Vote to concur with House amendments and pass a bill that redistricts the Arkansas Congressional districts for 2011-2012.

Vote to pass a bill that appropriates funds for the State Insurance Department for fiscal year 2011-2012.

Prohibits the use of a handheld wireless telephone by any driver of a motor vehicle while passing a school building or school zone during school hours when children are present.

Authorizes a city clerk or other elected official of the city to perform all the functions of a mayor in the event that the mayor is unable to fulfill his or her duties or cannot be located. 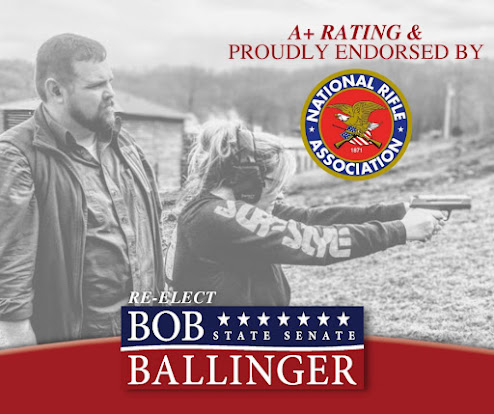 Senator Bob Ballinger is proudly endorsed by the NRA and his A+ is the highest score of any candidate in any of the current legislative races. 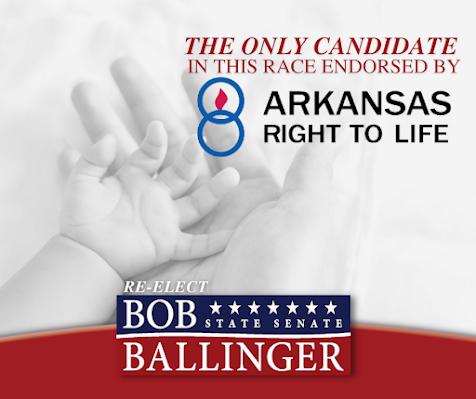 The right to life is our first and most fundamental right. No other right matters if we fail to protect the right of a person to be born. I am humbled to be the only Arkansas Right to Life endorsed candidate in my race. 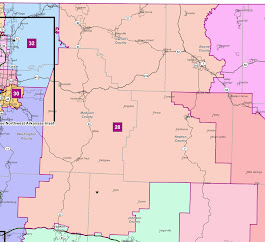